Rotterdam is the kind of city that either loves it or hates it, I don’t think it has half measures

It can hit you and make you lose your head because of its modernity or you’ll get bored and you’ll feel nothing but chaos, for exactly the same reason

I think, however, knowing a little bit of the history of the city, can make you enjoy the visit to the city with the largest port in Europe.
So here is some info and then I’ll tell you what to see and why

Have you ever wondered why the city is modern and different from the rest of the Netherlands?

The answer is found going back until 1940, On May 14, in fact, during a negotiation between the Dutch and the Germans for the surrender of Rotterdam, the city was bombed and, in particular, the center was razed to the ground, in 8 minutes 97 tons of bombs were thrown

In the same year they began to work on the reconstruction with what they called the Basic Plan keeping standing the buildings that had resisted the bombing, but totally changing the setting of the city compared to the past

What remained standing is still present there to remember the past:

Witte Huis – literally the White House, built in 1897-98 and at the time was the first European skyscraper with its 10 floors. The style goes from Art Nouveau to Liberty. Today we find only offices and a few bars/ shops on the ground floor, and the building is part of the National Heritage. You can enjoy its view while sipping a good beer and taste the typical French fries and bitterballen in one of the many clubs of the Oude Haven (Old Harbor) 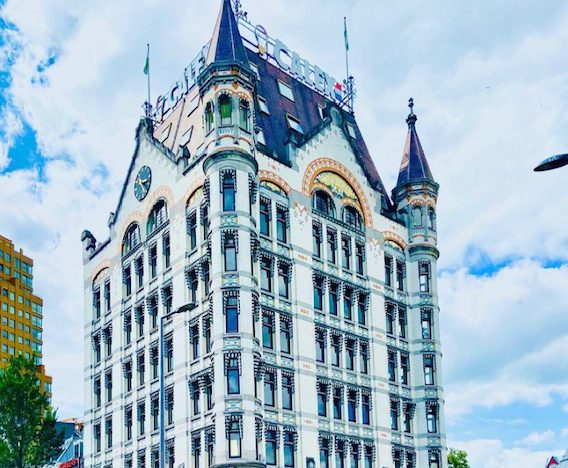 Stadhuis – this is the Town Hall, which stands imposing on the Coolsingel, one of the main streets of the city center. Designed in 1909, it is also eclectic, We find art deco, Byzantine style, Roman art and beaux arts. On the dome there are 8 painted windows representing the then European powers (Great Britain, Russia, France, Spain, Romania, Sweden and Norway). Also the town hall is among the sites of the National Heritage 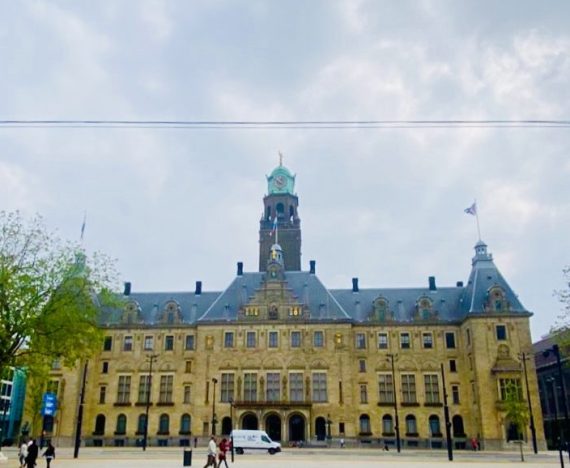 Sint Lawrencekerk – The Church of Saint Lawrence is the Cathedral of Rotterdam, we find it in the center, between Beurs and Blaak. It is clearly Gothic and is the only remaining medieval palace in Rotterdam. It was built as a Christian church and then converted into a Protestant church after the Reformation, eliminating and destroying altar and statues. It suffered damage during the bombing and also a subsequent fire, it was said to have been broken down at least in part but it was always voted against. This church is one of the symbols of the resistance in Rotterdam. Beautiful bronze door at the entrance, which represents war and peace. 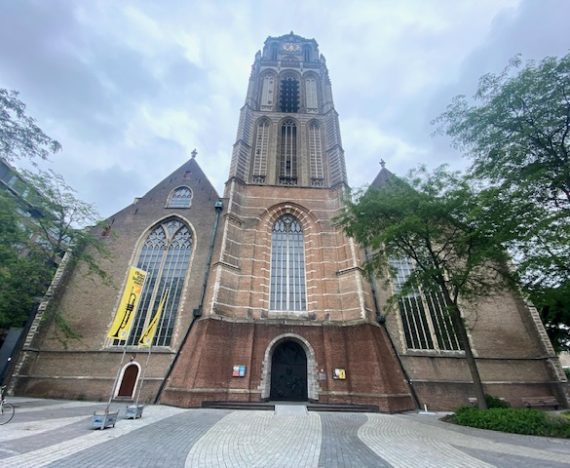 Rotterdam is very different from other Dutch cities, because of its history,

and it is important to say this because I think it is always right to adapt expectations. There are canals and houses with typical bricks evident but not in the center. It is modern and is an explosion of modern architecture. Let’s see something together:

Cubic houses –designed by the architect Piet Bom in the late 70s, are still one of the most creative attractions. It is a complex of sloping houses of 45 degrees and organized asymmetrically, the idea of Bom was to create an urban forest, where the tip of each roof is the top of a tree. The base consists of a concrete pole (trunk) that supports the houses that rise for 3 floors. You can either visit one, the Kijk-Kubus and the entrance costs 3 euros, or sleep in another via Airbnb. 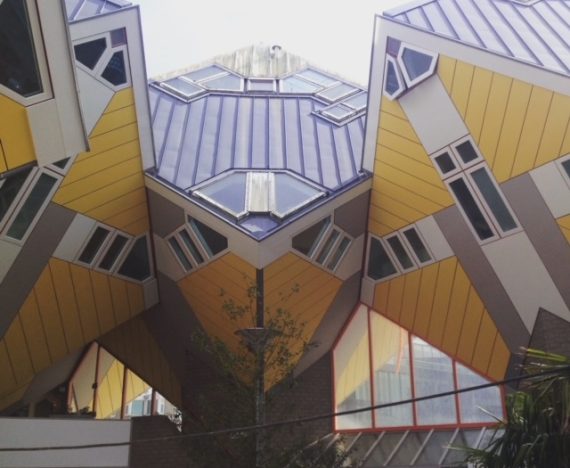 A side of the building complex of the cubic houses

Markhtal – It is located right in front of the cubic houses, in the square of Blaak. A horseshoe structure. On the upper floors we have apartments and offices, while on the ground floor there is the actual market, so stands of food and drinks, meat, vegetables, fruit and even restaurants. It was opened in 2014, I remember when it was under construction in fact. 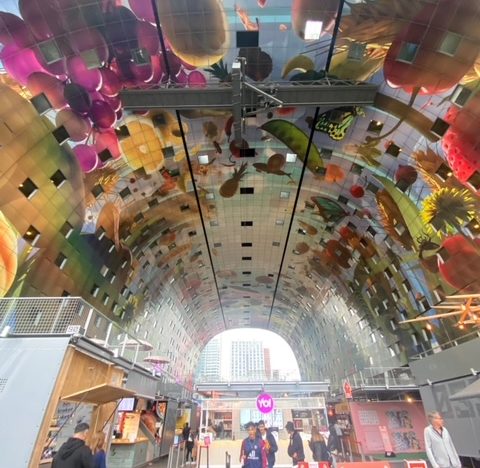 The ceiling of the Markthal

The Erasmus Bridge- the Erasmus bridge, called the swan because its color and shape recall the features of this elegant animal. It is a drawbridge that connects the city center with the South. It is a symbol of the city and was one of the reasons why Rotterdam was named the city of architecture in 2007. 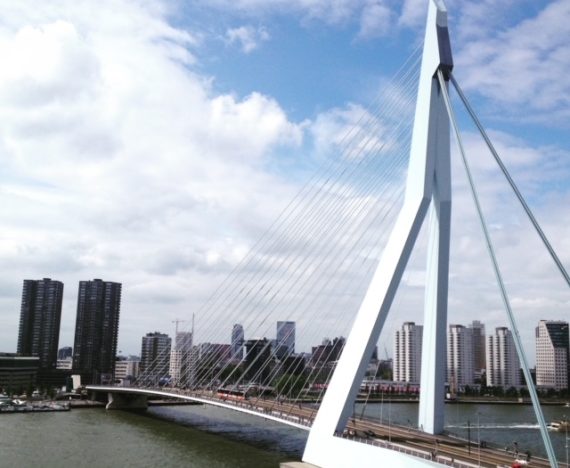 Hotel New York – Today a hotel and restaurant (very good among other things) was once the point of arrival and departure for those who emigrated or returned to and from America, where they were also quarantined ships etc…It still keeps is original poster ¨HollandAmerikaLijn¨ and from here you have a pretty view of the arbour. 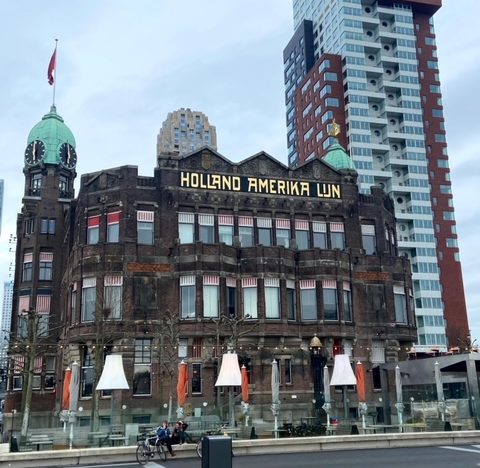 Facade of the Hotel New York

Euromast – one of the highest towers in the country, built in view of the Floriade in the 60s. The Floriade was a very popular floral exhibition in those years attended by international guests. The tower was 100 meters high, but following the construction of a higher plexus, to remain the highest in Rotterdam, was extended by another 85. You can climb the Euromast to enjoy a beautiful view. Judge from the photos. The restaurant and suites are 100 metres away for a bit of romance. The highest part can be visited by a sort of small boat that, while climbing, goes around the central pole, so that you can admire the view by listening to a recorded voice (in English and Dutch) that explains what you are seeing. 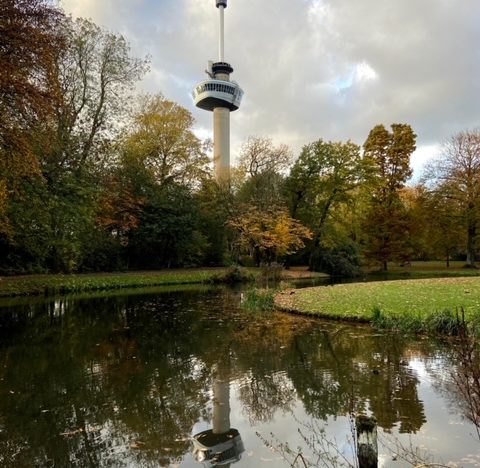 Green areas- Rotterdam, like all Dutch cities, is full of green spaces at every corner. The 3 largest parks are Het Park, where there is the Euromast, Kralingenbos with its lake and Dakpark. 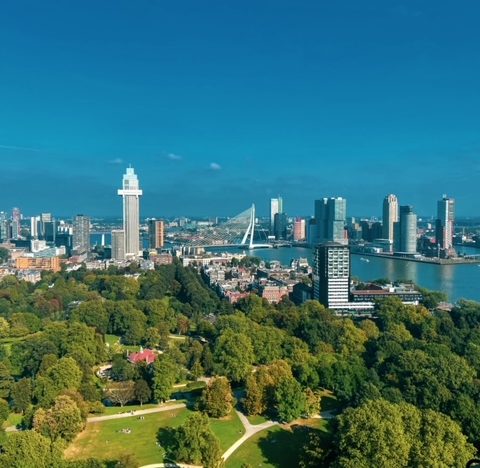 A view of Rotterdam

Museums – there is no shortage of museums, although they are not the classics. The closest to traditional museums is the Wereldmuseum. At the moment and for five more years, in this museum you will find works of art (mostly paintings) also the museum Museum Boijmans Van Beuningen (closed for renovation) and the If you love contemporary art and design you can not miss a visit to the Kunsthal, for photography instead go to the National Museum of Photography, Nederlands fotomuseum where the photographic works of Dutch artists are exhibited. The city with the largest port in Europe could not miss the Maritime Museum, fun to visit even with children. If you’ve done some research, you’ve surely heard of the Depot... A great and wonderful deposit of works of art, connected to the Museum Boijmans Van Beuningen, which I hope to visit as soon as possible and talk to you (pandemic permitting) on my instagram channel, as done for others. 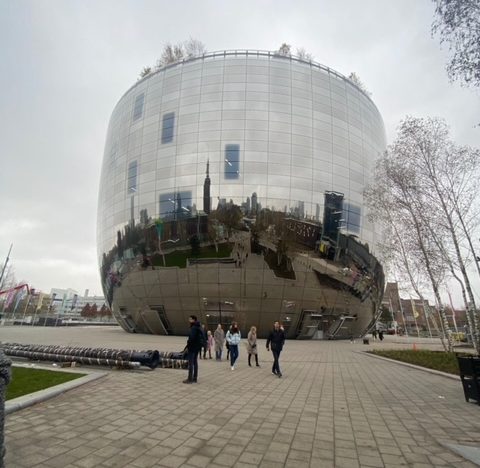 In Museumpark you will find other museums of different kinds, more or less large and more or less modern, remember that they are always closed on Sundays.

I recommend that you also miss a bit to the city center, with its two levels and its modernity mixed with more classic streets and statues with strange meanings, such as the Kabouter Buttplug, will surely leave you surprised.

If you have time to move from the center, I recommend you go to the Delfshaven neighborhood in the afternoon, a typical Dutch neighborhood, where you will discover the streets and houses of classic Holland. Once here, stop for a beer tasting at the De Pelgrim brewery and don’t forget to try the Bitterballen 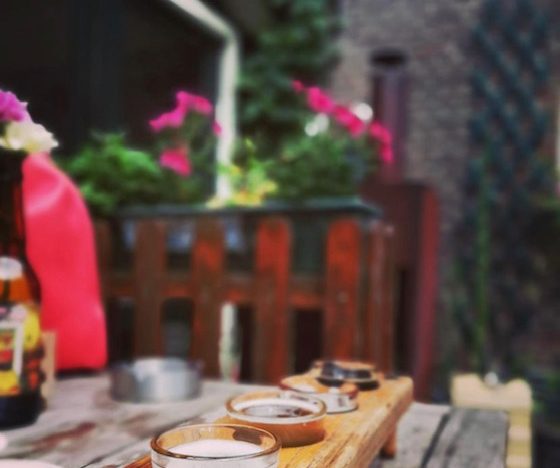 Street art – Download the app Rewriter and explore the city through the graffiti. There are more tours you can make, a lot of graffiti are also interactive, yes you can be part of it! Via the app you get the map, and the explanation or what you are seeing, you can choose to read or listen to it. 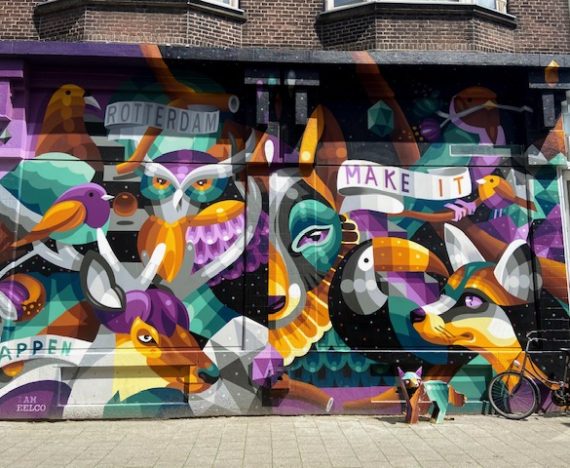 One of the graffiti from the tour Make it happen

Zoo – For those who like this kind of activity, in the area of Blijdorp you can find a huge zoo. Do you think it was Nemo in the pic? 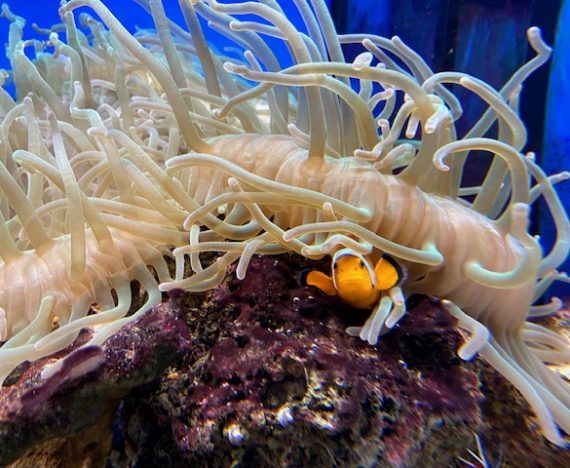 And now you tell me, do you know these places in Rotterdam?

Looking forward to hear from you

Checklist to move abroad and be ready!