When it comes to the Netherlands, it is easy to think of Amsterdam, Rotterdam, The Hague, Utrecht, mills, wooden clogs and tulips.

I myself tell a lot about Rotterdam on my social networks, because it is the city where I live and that I love.

Lately I have come across many reels and posts, especially on Instagram, where they define unusual places in the most touristy areas or where people tell about Dutch culture after spending only a short vacation in the capital. It got me thinking…

Nothing to take away from Amsterdam and the other cities mentioned above, but it remains that if you want to talk about unusual places or if you want to discover something more of the Dutch culture, you have to move from the tourist areas.

I would like to read more posts by people who talk about their experience and don’t pretend to have the truth in their pockets about a country for a few days of vacation.

Leaving aside the controversy (forgive me and allow me), I thought it was nice to tell in an article, of some less known places in the Netherlands that I went to visit in recent years.

Delft: It is a small and lovely town, famous for its pottery. The blue of Delft, and because here lived the painter Vermeer, the one who painted ¨the girl with the pearl earring¨ . In Delft we find a lot of history related to William of Orange and the royal family.

In relation to these 3 subjects you can then visit the museum of the Royal Delft Blauw, where you will not only be told the history of Dutch porcelain but also how it is worked, the museum dedicated to Vermeer (although his paintings are in Amsterdam and Den Haag), the Prinsenhof which was the royal palace of William of Orange, but earlier a monastery. The palace dates back to the Middle Ages.

The central square, Markt, is dominated by the Nieuwe Kerk (the new church) and the town hall. The church can be visited and, if you feel like it, you can climb over 300 steps to enjoy the view of the city from above.

If there is a new church, there is clearly also an old one, the Oude Kerk is less than 5 minutes walk and is behind the royal palace. The great peculiarity of this church is the tower, extremely crooked. Both churches are Protestant. 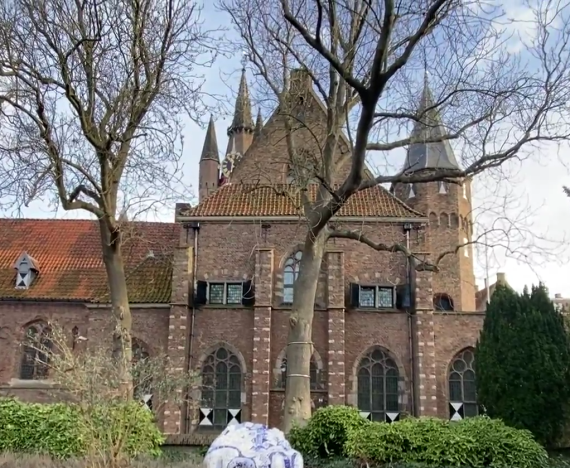 Dordrecht: We are still in the Zuid Holland region. Dordrecht is a real gem of the Netherlands. An authentic town dominated by art, vintage and water.
Walking around Dordrecht, in fact, you will be amazed by the amount of antique shops, more or less valuable, and the art exhibitions that you can admire freely.

The city is indeed, an island. It is located in the middle of 3 rivers: Oude Maas, Beneden Merwede and Noord.Of course, there are two ports that are picturesque. Wolvershaven and Nieuwe Haven.

The history of Dordrecht dates back more than 1000 years, probably for this reason we find about 950 monuments, 7 churches and 6 museums.

Walking around the city you can admire many buildings dating back to 1600, some of these elegant houses can be visited because they became museums, note.
Also here there is the Grote Kerk, the large church, with another bell tower not exactly straight and counting more than 270 steps. 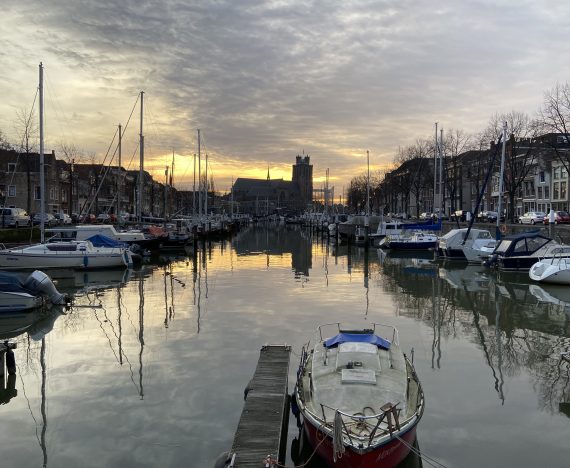 Port and view of the Grote kerk

Fortresses: I recently talked about 3 fortified cities. Goriche, Woudrichem and Slot Levenstein. Here is a short video, a reel, on my Instagram channel.

These 3 towns were fortified between the 16th and 17th centuries. Gorinchem in particular remains the most authentic.

They are located along what was once the Dutch Old Waterline that crossed the country from north to south. This means that you can reach them by small public service boats to enjoy the experience even more.

Slot means castle, so this town is nothing more than a piece of land in the middle of the water on which stands this beautiful castle. Built between 1357 and 1397, it first became a strategic location and then a prison. He is also mentioned by Dumas in ¨The Black Tulip¨ 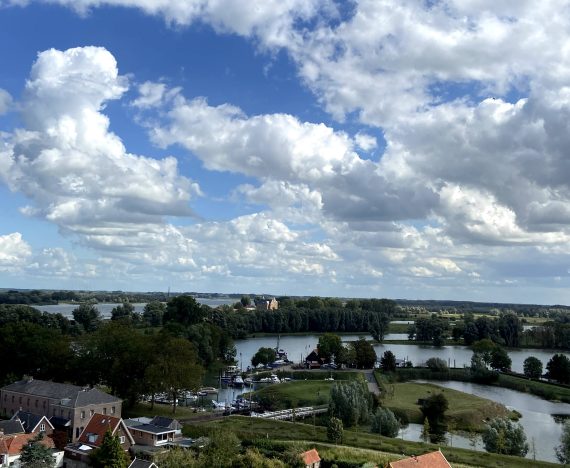 View from the tower of Gorichem

Let’s move a little further south, in the area of Noord Brabant. Yes I know, I said that we are in the South but the area is called North , is not a mistake, is that the rest of Brabant is actually called Vlams Brabant and is the Flemish area of Belgium.

Oirschot: is a small town with more than 300 monuments.
Let’s see something together –
The tallest building of this town is the Roman ¨Sin Petrus – Bandenkerk¨ built in Gothic style between the 15th and 16th centuries. The tower is 74m high

The village was built around the Church, also Roman, Maria kerk dating back to the 12th century.

The monastic Nazareth is very large and impressive and boasts a chapel in neo-Romanesque style of 1910.

Walking through Oirschot, in addition to a large yellow O, you will find a giant chair to climb to take a photo. But why?! The answer is in the history of the economy of this city that had in fact the largest chair factory in the country (end 800).

The Grote Stoel (large chair) was created in 1958 to commemorate the historical period and as a tribute to the local craftsmanship. The chair is a classic American chair completely in wood, as in fact, it was produced at the time.

In Oirschot you can also enjoy a delicious craft beer – De Kroon – at the brewery.
I’ll tell you about Oirschot and Noord Brabant in these short videos. 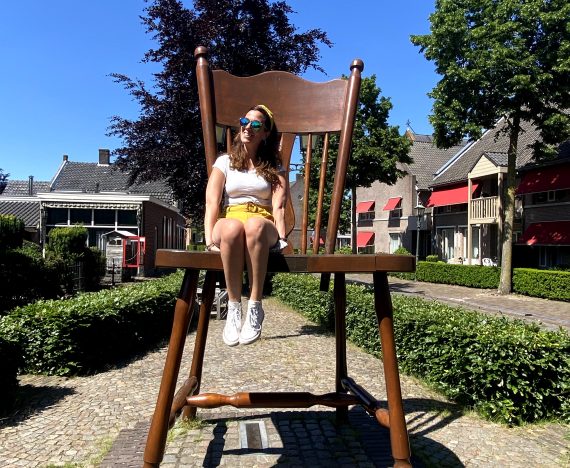 Oudenbosch: if you follow me on Instagram you will probably have seen the post where I tell you about the little Saint Peter. You understand well! The Minor Basilica of Saint Agatha and Barbara is nothing more than a miniature of Saint Peter’s Basilica in the Vatican. In fact, it is totally inspired by it although it is 16 times smaller.

Another difference is in the columns. In San Pietro they are in fact marble, while here they were painted to give the effect of marble.

The idea of creating this basilica was Father William Hellemons, who was particularly linked to Rome, the Basilica and the church of San Giovanni in Laterano, where he had studied.
The architects who built the building were Pierre Cuypers and, for the facade, G. van Swaaij.

Oudenbosch is rich in religious monuments, following the silver points on the road you will find others. 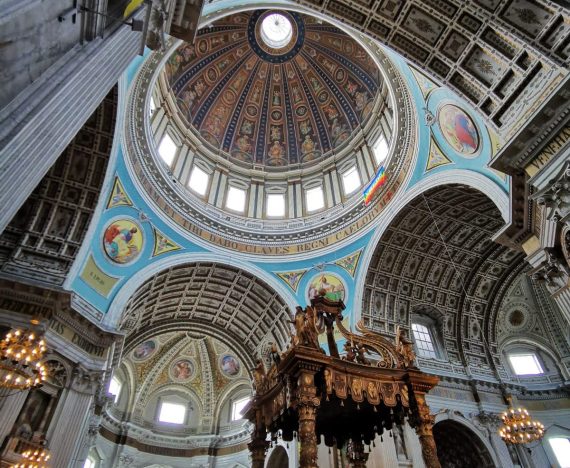 Nijmegen: Let’s move east of the country to the oldest city in the Netherlands. In 2005 Nijmegen celebrated 2000 years of history. City super alive also because university.

Among the sights of particular interest is the Nikolaiskapelle (Chapel of Saint Nicholas). It is one of the remaining visible chapels belonging to the castle Valkhof.

Do not miss the opportunity to visit the naturalistic and cultural museum De Bastei, really suitable for everyone and in certain parts even interactive 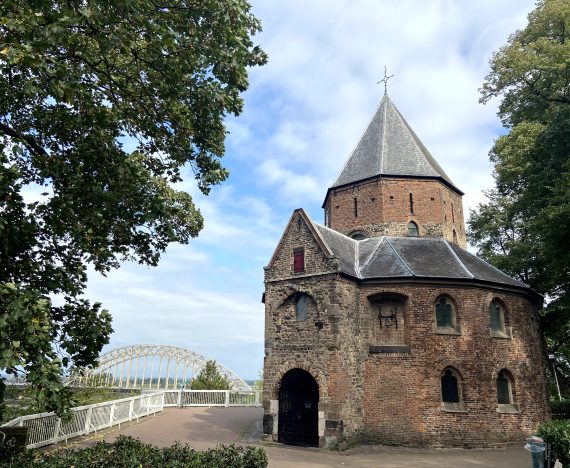 The city is part of the Nijmegen-Arnhem conurbation. Of Arnhem in particular I spoke on youtube referring to the open-air museum, Openluchtmuseum where you can take a beautiful walk through the Dutch history starting from the houses and farms and how the work was done over the centuries. Yes, with actors in wooden clogs ready to give you demonstrations. 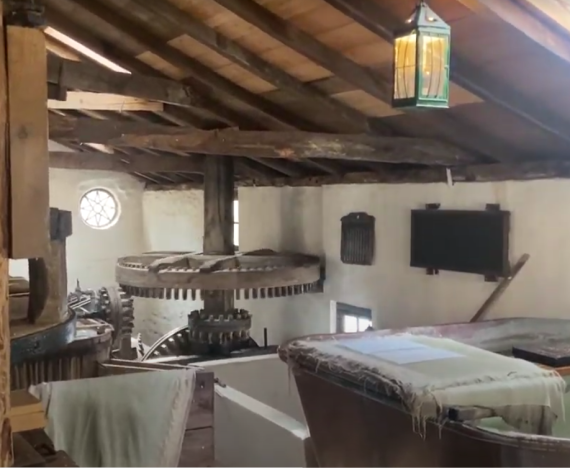 These are just brief references to some of the lesser-known places in the Netherlands.

Keep following me on my social channels because I would like to tell you about new ones, along with other interesting facts about the most famous cities.

For the blog lovers, he will read new articles grouping together more towns.

Interview on the road with Simona

Going to school, the Italian way

Interview on the road with Simona