Here I am back with an article on the Travelling section. First of all, however, I want to clarify that this is a personal story and not a travel itinerary, although I will give some practical info. I think it’s important to say this before you dive into the reading, to make sure the story meets your expectations.

The idea of a long weekend in July was born from the need to have a break before the real holidays that will be in August. In addition, given the problems with airlines we wanted to avoid taking the plane and risk staying a thousand hours at the airport or, worse, see the flight cancelled.

Cologne is not far if you live in the Netherlands, from Rotterdam there are more train connections, with changes, for a total of 3h of travel. Here comes the big disappointment of the trip. I did not expect, in fact, that very civilised and very organised Germany would have a railway network that left something to be desired. In the past I had the opportunity to visit other German cities (Berlin, Nuremberg and Bamberg) and I almost never took the train, so I had only ideas and expectations based on little experience (only train taken between Nuremberg and Bamberg)

Delays aside, we arrived. We stayed at a Chain Hotel, Hotel motel one, although initially we had booked elsewhere. It seems that the reservation was overbooked and they cancelled it 24h before departure. Anyway, simple but nice hotel with really good bar and lobby area. Also we were only 1km from the city center.

The main attraction of Cologne is definitely the cathedral.

Admission is free, while to climb the tower the ticket costs €6. After 500 steps you reach the highest possible point and enjoy a beautiful view of the city on the Rhine. Really good as an experience, despite the effort! 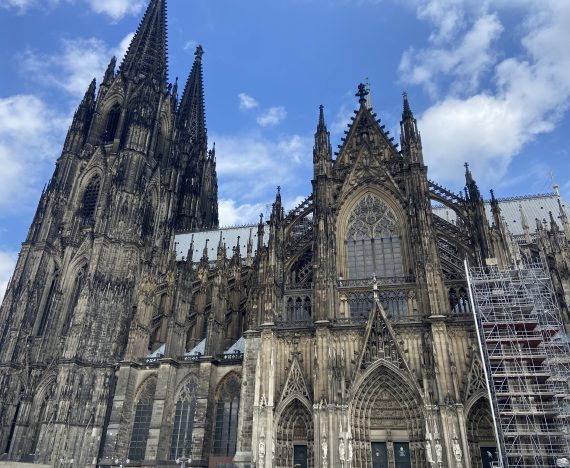 Around the Rhine you can walk, sit on the lawn or drink a beer, there are many restaurants, for us too touristy, and also ships with ball music and parties every night. To each his own. But what we noticed was the dirt of the area and the streets in general.

As for the train, even in this case, maybe I ave adapted too well to the Dutch standards,  because in Holland there is a lot of care in the cleaning of the roads and although the delays of the trains are not missing, let’s say they are not the standard and you still have an alternative.

Having decided to have a relaxing weekend, we did not even organize much. We would have liked to go to the historical museum (stadt museum) which was closed for restoration, we folded on the Chocolate Museum. Maybe too touristy? And certainly a little expensive (€15 entry for adults), but in my opinion, nice and interesting.

There are explanations of what you are seeing and you can see the whole process of making chocolate and then how it is divided into the molds to give the shape of the most famous Lindt chocolate. But not only that. In the various rooms you can find out the story of cocoa production and in which countries, there are curiosities about the countries that consume the most, of which brands collaborate so that the conditions of cocoa workers are improved (Milka, Tony Chocolonely, Lindt and other brands). Finally, many info about how cocoa and chocolate were used as a natural remedy for some diseases and how drinking hot chocolate became a typical noble habit.
Ah yes, here and there, you are given a chocolate to eat, which never hurts! 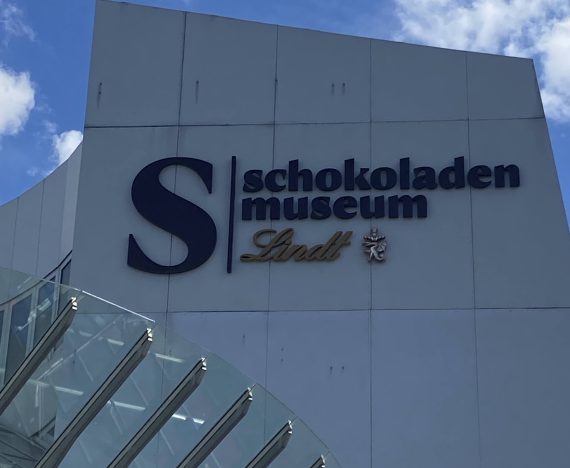 We liked to go around in the evening, all the bridges on the Rhine are also pedestrian and then you reach the other side to enjoy a beautiful view, with the games of light not just. Judge you from the photo: 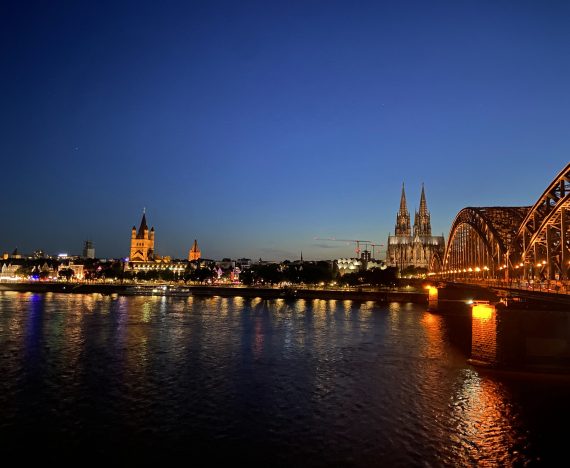 Surely if you want to enjoy German specialties you can’t stay on a diet or be vegetarian/vegan. Meat here is a must and I love it.
Pork and potatoes cooked in any way, whether it is a sausage to eat in the street, the pork shank served with mashed and sauerkraut or kotelett (meat with bone) simple or breaded, the menu is more or less this. To accompany all the beer. You order by calling it krolsch and usually they serve you the glass from o,2l and the waiters change your glass until you say enough, so by default! 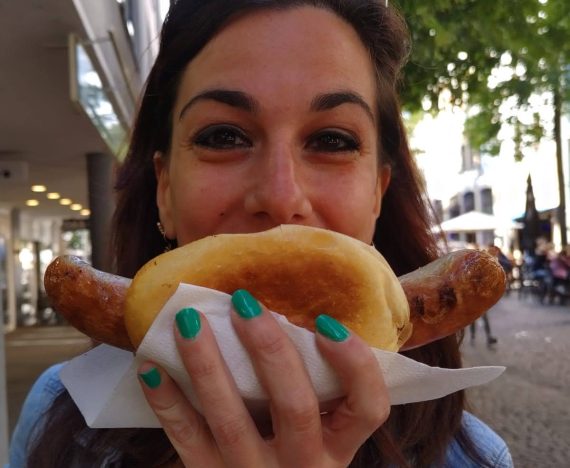 We also found that in Cologne wine is important and often in the menus of restaurants you can find various.

We had dinner in 2 not tourist places (the locals looked at us intrigued): Gastätte Wirtz and Gastätte Bei d r Tant.

In general the Gastätte correspond to pubs or trattorias, spartan and delicious. You pay the right, the average for dinner for 2 with various beers for us was € 50 total.

Very close to Cologne, but very different, Bonn. A town that seems almost a village, elegant, much cleaner and that probably plays all its tourism on the fact that Beethoven lived there for 4 years of his life.
In fact there is also the house-museum of the little Beethoven (admission € 10, it is not allowed to take photos or videos). Actually we talk about Beethoven in general, his habits, there are private letters, instruments that helped him to hear when slowly his deafness increased, scores and musical instruments used by the composer. In one room you can also listen to some of the symphonies. 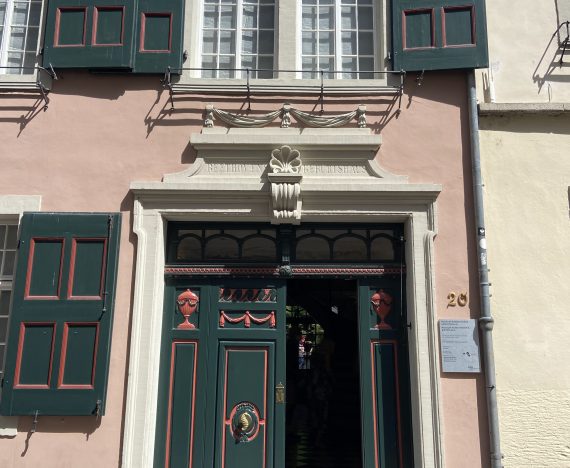 Again, Bonn was an impromptu ride and we walked around, drinking a few beers in a beer garden on the Rhine. If you go there to see it well, don’t do it on Sundays because it is almost all closed.

A curiosity about Bonn

Just in the square in front of the town hall, you find a sort of trap door on the ground in memory of the day when the books were burned during the Nazis.
Every year, one day in particular, the students go there and the teachers open the trap door where the copies of the books that were burned are kept!
A simple gesture but in my opinion of great value.
What do you think? 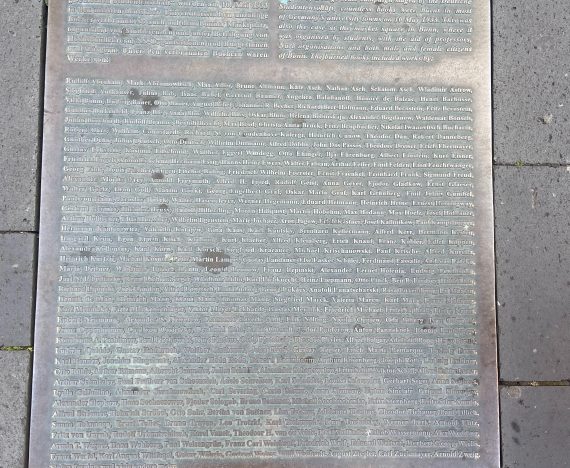 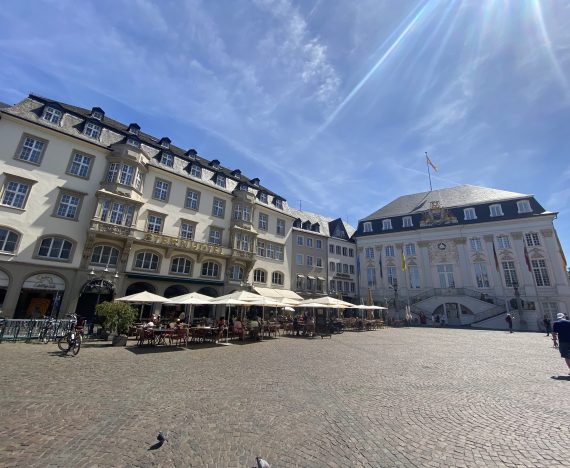 To reach Bonn we took the train from Cologne South (but there is also from the central station) and we arrived there in 15 minutes (train delays aside). The cost from Cologne Central Station is €15.40 and from the South Station about €12. But we took advantage of the promotion that Germany is doing on the trains, so for €9 we bought our name ticket that allowed us to go and return at no extra cost. The ticket is valid until the end of July.

In Cologne the carnival is very important, there are statues and references in all the premises, the clown is one of the most popular masks and from what they told us, it is an event not to be missed. Of course we’re talking about February, but Chissá, it might be an idea!

Thinking about moving to Germany? Check out this YouTube video, and if you have kids and want to understand how the school system works, read the article!

Tak to you soon

How to find a job abroad… but not only