Here I am back from the summer holidays. Also this year dedicated to Italy and with the final stage in Sicily, in Messina, to visit my family. The first part of the holidays we spent wandering in Puglia and with a stop in Calabria, but let’s go in order. I’ll tell you all:

Bari is divided into new and old city. Having spent there only 1 night we focused on the old city and we fall in love with it. It is not only beautiful, but also rich in tradition.

To discover everything, we booked a few hours with a tour operator, Velo Service, we did a walking tour that included the historical cultural part, but also the culinary part, and yes, the preparation of orecchiette pasta. Orecchiette means little ears, due to the shape of this pasta. 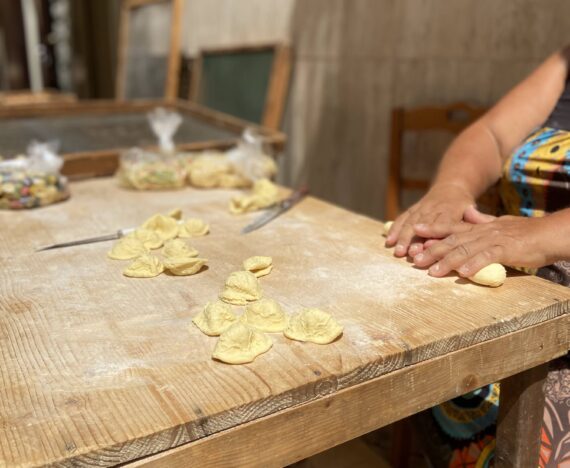 Perhaps you already know how devoted the city is to Saint Nicholas, and in the historic center we find the Church dedicated to him. It is a Basilica and not the Cathedral.

Following the legend. when the bones of Saint Nicholas were brought to Bari, the towing horses stopped right where the Basilica stands today. Probably from the heat and fatigue, but the believers took it as a divine sign. It was May and for this reason in this city Saint Nicholas is celebrated 2 times a year (in May and December) 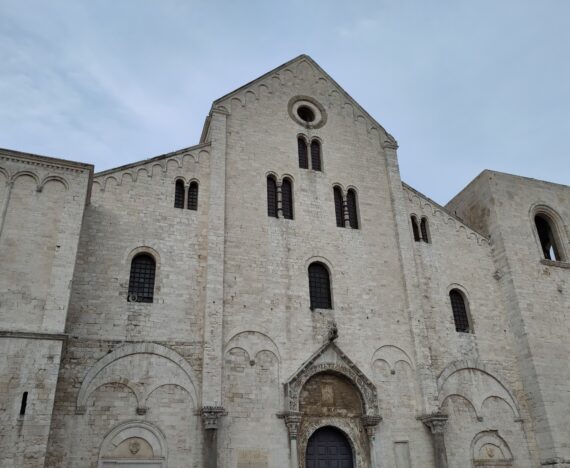 The Cathedral is not far away and one of its peculiarities is the rose window, when the sunlight hits it, the reflections inside create exactly the same design that is on the floor. Almost a magical effect. 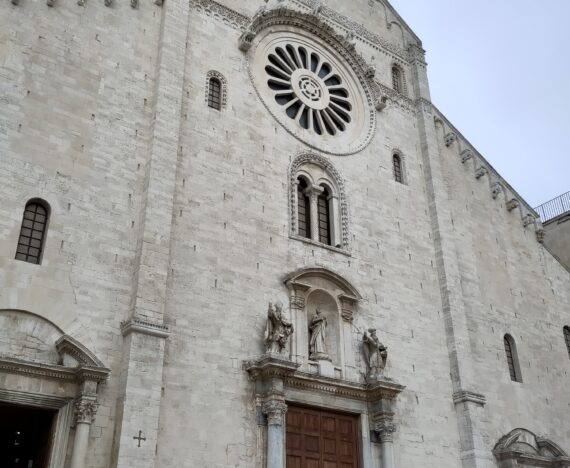 In Piazza Mercantile is the infamous Column, or the public pillory. A column, which was once close to the city walls and a lion, in homage to Venice, to which the criminals of the time were tied with a rope.

Do not miss a walk on the old walls to admire the sea from a higher point and clearly the street of orecchiette, where women from Bari, outside their homes, make and sell their typical Apulian pasta.

Another square that deserves at least a nod is Piazza Albicocca. It is important not only for street food, but also as an example of redevelopment of an area that lived in decay. Thanks also to IKEA the square has been redone, olive trees and various plants have been planted and 2 large benches to enjoy the relaxing food. 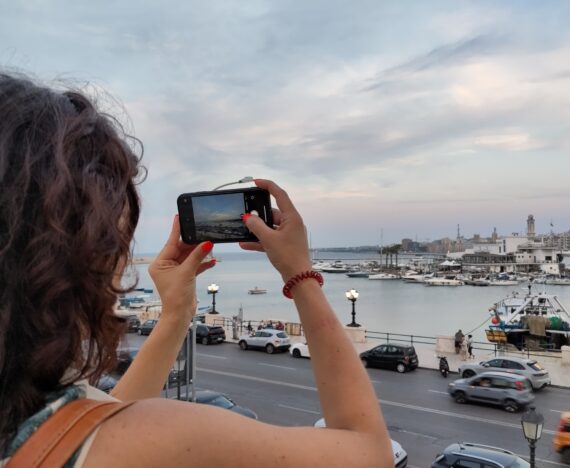 There is much more to tell about Bari, for that I really recommend a tour once you arrive in the city.

Casamassima – the Apulian on the road planned at this point to move towards the Valle d’Itria, known as the Trulli area. Going in that direction we stopped in Casamassima, the blue village. The blue village affects only a part of the town, expectations were a bit higher than what we found.

Anyway, the idea is really nice, and according to what the locals told us, there seem to be some interesting projects going on. Not only to recapture the houses of blue, but also to give new life to a monastery, currently under renovation, and the prison now empty, creating respectively a museum and an area for artists and craftsmen.

Hopefully they’ll be able to do it soon. 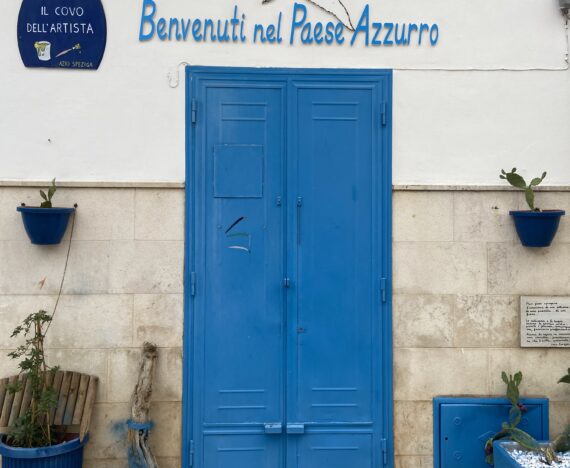 Ceglie Messapica– the town that we liked most in the part of Valle d’Itria that we visited is definitely Ceglie.
White, alive, less touristy than the others. Not only churches but also the Ducal Castle, the gates of the city and the walls all around the hills on which it stands. Moreover, Ceglie is a city of art and a gastronomic land.
Certainly much more authentic, suitable for citizens and not that touristy. We were lucky because we happened in the period of the feasts of Sant Anna and San Rocco and we saw it decorated with lights, which we call luminarie 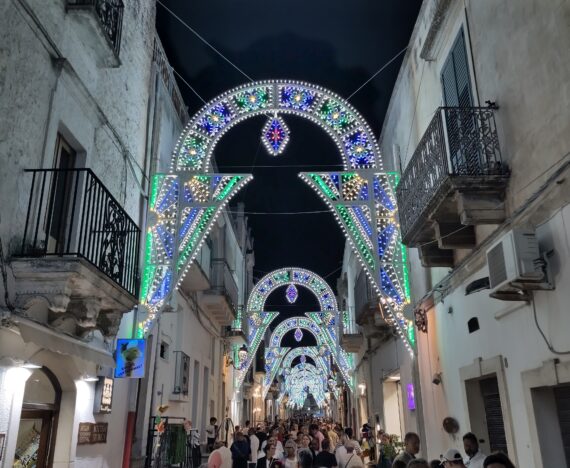 Locorotondo and Alberobello – If the first has enchanted us with its whiteness and the beauty of its streets, the second made us fall in love with the trulli but disappointed that it looks like an theme-park. Do not get me wrong, there is nothing wrong in particularly touristy places, and seeing all the trulli together in a small village is a really unique and beautiful thing, but the fact that 99% of them is a souvenir shop all the same is really disarming.

In Locorotondo, we also had the opportunity to appreciate part of the Itria Valley and its trulli from a different point of view, exactly from the viewpoint of the Villa Comunale. 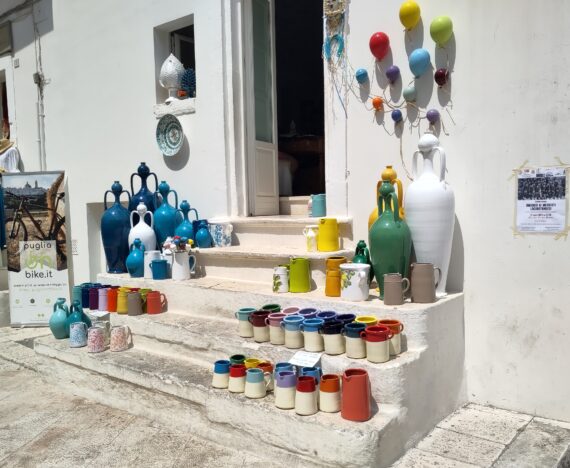 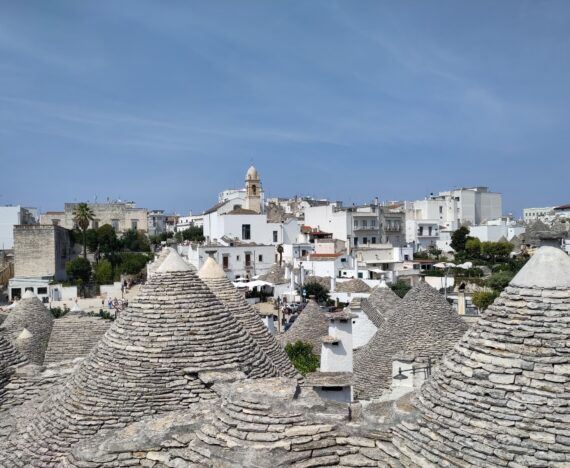 After another stop in Apulia, in the area of Taranto we reached Calabria.

We spent only one night there, too little but we will go back.

Pizzo Calabro – full of churches and palaces, but also a castle which seems to be the most extreme point of the old town, and from which you can enjoy a wonderful view of the sea. It seems that Gioacchino Murat was imprisoned here. Today it is a museum that can be visited.

Pizzo is famous for the truffle ice cream. It was named after the tuber for its shape, and because it is served with a sprinkling of chocolate that recalls the truffle just harvested from the earth. 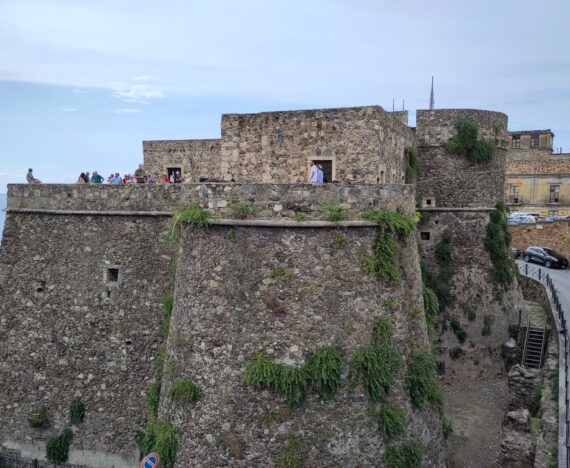 Tropea – perhaps one of the most famous and touristy places in Calabria, famous for the red onion, but we talk about the food in the section dedicated to it at the end of the article. Tropea is really very pretty, it is located in what is called the coast of the gods, and it is easy to see why. 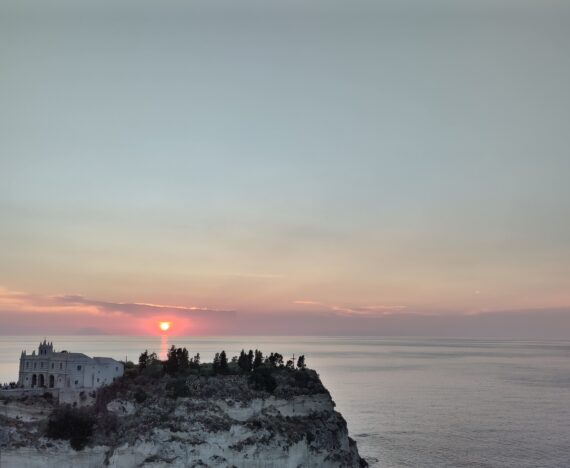 Chianalea di Scilla – continuing the journey to Sicily, we stopped in Chianalea, in Scilla.

From here you can see very close my Messina with its pylon. A fishing village where time has almost stopped. If you arrive at the right time of day you can see them working, repairing boats and fishing. A village all extended in length, a sea of an indescribable color. 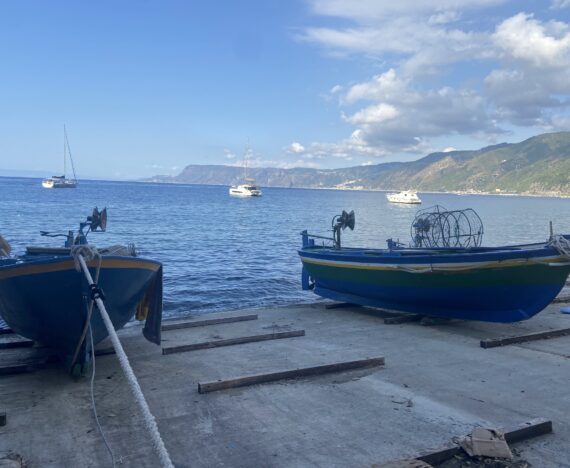 Unlike in recent years, this time the stay in Sicily was only in Messina.

Anyway we came on time to join some traditional events.

In fact, we were there for the mid-August (Ferragosto), which in Messina is a very important event with the procession of the Vara representing the ascension of the Virgin Mary into heaven.

The Vara weighs a couple of tons, has no wheels and is carried in procession by the devotees who, pushing, walk barefoot through the main streets of the city, up to Piazza Duomo. It has a pyramidal structure. Angels on each side until you get to the highest point where Jesus is represented that brings the Madonna to heaven.

The tradition of the Vara dates back to 1500 with various changes of the wagon, both political and practical. For example, until the late 1800s the little angels were real children, like the Virgin Mary, played by a girl. An accident, fortunately without serious consequences for anyone, caused children and girls to be replaced by statues, for greater safety.

The evening of August 15 ends with beautiful fireworks. 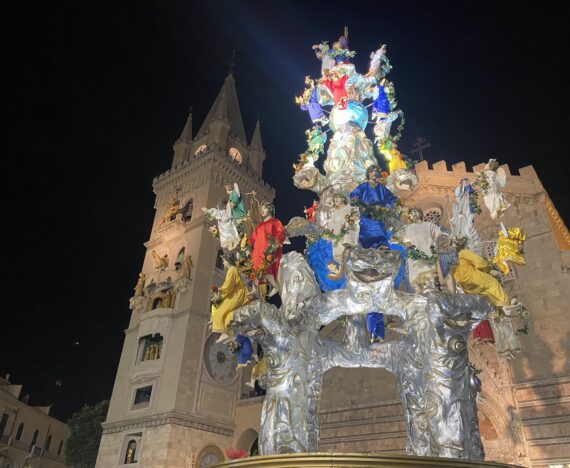 The Giants – represent another of the traditions of mid-August Messina.
Mata, a white Sicilian woman and Griffon, a dark Arab man, are the founders of the city. They too are carried in procession, from 10 to 14 August.

There are more legends about them, but I like more and more the one about the love between the two protagonists, so different and yet so similar. And I’m excited that my city was founded by mom and dad from different cultures. Although Gryphon had to convert to Christianity to marry Mata, but hey, it was only  950d.C. 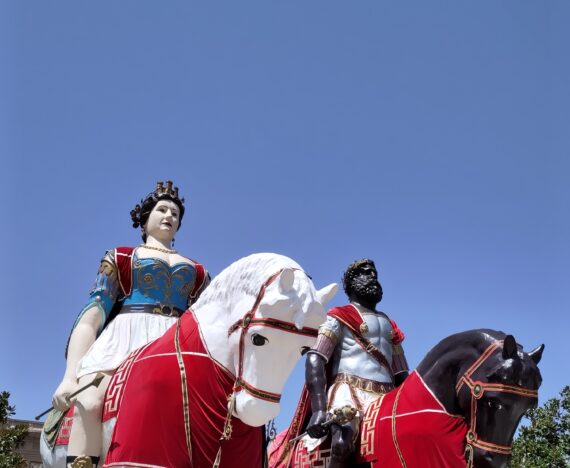 We endend our holidays with two more visits:

Guardiola di Piraino – we are in the province of Messina, direction Palermo, from the guardhouse you can enjoy one of the most beautiful views of Sicily ever. In the sixteenth century, the guardhouse was a fortress, an observation point, then during the fascist period became the balcony with white balustrades that we know now. However, the vault and the cannon are missing, destroyed at the end of the twenty years of fascism. 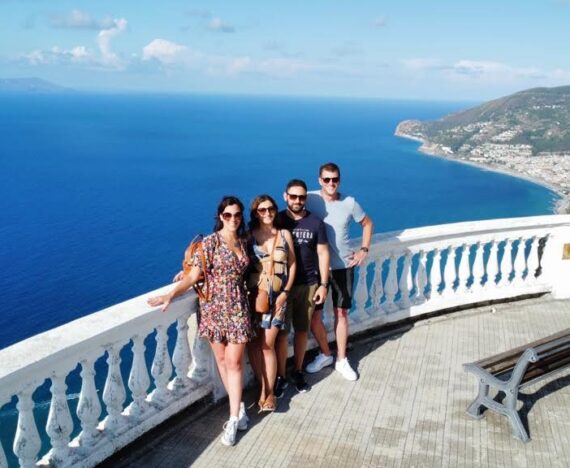 Catania – The stop in Catania was not scheduled, but we added it for practical reasons the night before departure.

I don’t feel like giving particular advice about this city, which deserves time and knowledge, but I will tell you a curiosity. The symbol of Catania is the elephant, in local language u liotru. You will find a large statue of the animal in Piazza Duomo, made of lava stone. It seems that the ancient inhabitants of Catania believed that the elephant was a symbol of protection from the flows of Etna. 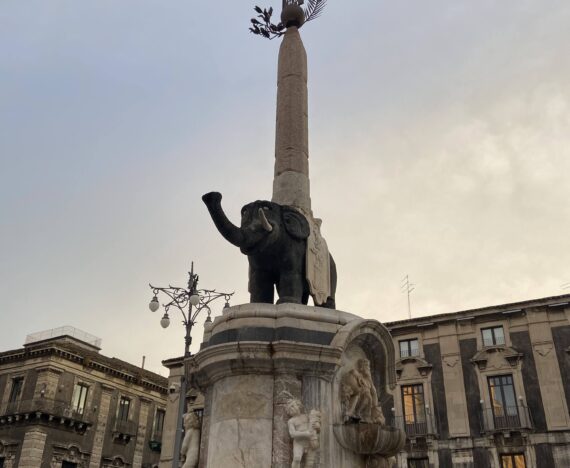 It is not easy to make a selection of what to eat, but here some kind of must eat list:

In Puglia, of course, do not miss the orecchiette, not only the turnip tops but also the tomato and other variants. The panzerotti, the bombette of meat and in general the capocollo. The cookies from Ceglie, and the focaccia in Bari.

In Calabria in addition to tasting truffle ice-cream (which is mainly chocolate and nuts taste ice-cream), we enjoyed a swordfish dinner.

In Sicily the braciole of meat or swordfish, classic in Messina. To better understand what I am talking about, let’s say that they are types of rolls stuffed and cooked in a pan or rather (better) on the grill. The traditional ones are beef and stuffed with crumbs and cheese, but there are variations such as the Aeolian ones with cherry tomatoes and capers.

For us, breakfast is granita and brioches.

In Catania is typical horse meat, which you can eat in any form.

Where did we sleep:

For this trip we chose to stay in bed and breakfasts, I bring back those who impressed us:

Waiting for the next trip to be able to tell you I send you a virtual hug and I wish you a good coming back to your routine.

Going to school, the Dutch way